Click Here to get a sneak peak of our book - Preface through Chapter 1.

Our goal in creating this website and writing our book, Vigilance The Price of Liberty, was to inspire the public to become well informed and reasoned and to demand better from those that we elect.  This is a non-partisan, Father-Daughter creation exploring our past, present and future through our current state of affairs from the perspectives of two generations. During this journey of enlightenment we became angry for being played for fools by politicians and the media, fearful for our future from the pending economic disaster, and aware that the issues that face our country have largely precipitated from a lack of vigilance by it's people.  The absence of vigilance has produced a collective ignorance of our nation’s history, a disregard for the Constitution, and a public that has become disenchanted and disaffected by political games.  It has become more important than ever to read and understand our founding documents to give us the tools needed to insure the blessings of Liberty and prosperity.  We invite you to read our book and explore the documents to arm yourself with knowledge.  You can buy or download our book here as well as join the conversation.

As a high-tech business executive for the past two decades, he has founded, managed and grown software companies for manufacturing, telecommunications and predictive analytics.  His work took him across the globe, from which he developed a keen understanding of the unique role of America and American liberty to produce prosperity.  Concerned about the destruction of liberty from partisan politics and a media that takes sides, he was compelled to research American history and the Constitution to find solutions.  He then joined with his daughter on a journey to reclaim the liberty we have let government take from us.  Robert has a Bachelor of Engineering from Stony Brook University and a Masters of Science in Mechanical Engineering (in thermodynamics and fluid mechanics) from CSU Los Angeles and is a registered Professional Engineer in the State of California.

She is currently a student at the University of South Carolina studying Biomedical Engineering with a Business minor.  Her love for the nation's history was sparked when taking Advanced Placement U.S. History in high school.  Combined with her interest in biomedical engineering, she did her high school senior project on the impact of excessive and uncertain regulations on medical advances.  Her research revealed how regulations hinder medical development but, more important, she discovered the threat to liberty as it affects her future and the future of her generation.  Without liberty she would not have the opportunity to achieve the "American Dream".  She was inspired to co-author the book, Vigilance The Price of Liberty, when writing essays for her college applications that asked to discuss the most important problem facing her generation.  Realizing that too many people are not sufficiently informed of the facts to demand a well-managed government,  she and her father began a two year journey of enlightenment that resulted in writing Vigilance that they hope to share with and engage other people to become vigilant. 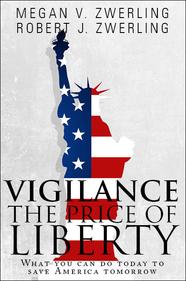